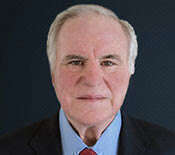 Bill began his career at Paine Webber in 1967. When he left Blyth Eastman Paine Webber in 1982, he was a Managing Director, Head of the Real Estate and Financial Institutions Groups in the Investment Banking Department.